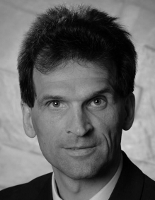 Dr Thomas Hanemann, Lecturer at the Department of Microsystems Engineering (IMTEK) at University of Freiburg, Germany and Group Leader at the KIT Karlsruhe, Germany. Thomas Hanemann finished his studies of chemistry at the Technical University of Darmstadt (TUD) in Germany with the diploma thesis in organic chemistry in 1987. The PhD followed 1993 at the TUD’s physical chemistry department dealing with the development and characterisation of new material systems with liquid crystalline or nonlinear optical properties, the latter one especially in polymers. As a postdoc he continued related work at the Organic Optoelectronic Materials Department of the IBM Almaden Research Center in San Jose, California, engaged in the development of new photorefractive materials. Since 1995 he is scientific staff member of the institute for materials research at the Research Center Karlsruhe (Forschungszentrum Karlsruhe). Thomas Hanemann’s main areas of interest are the development of new materials (polymers, nanocomposites) with improved physical properties and investigations on new replication techniques like powder injection molding for application in microsystem technology. Since 2000 he is lecturer at the Department of Microsystems Engineering (IMTEK) at University of Freiburg, Germany and for FSRM. Also since 2000 he is group leader at the former Research Center Karlsruhe (FZK), today KIT, and at IMTEK. In 2005 he did his habilitation at IMTEK, since 2009 he got a professorship at IMTEK.