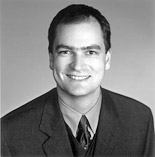 Dr Hendrik Hölscher is the head of the micro- and nanomechanics group at the Karlsruhe Institute of Technology (KIT), Germany. He studied physics at the University of Hamburg and obtained his Ph.D. in 1999. Focusing on the development of advanced atomic force microscopy techniques he worked for different research institutes as a Post-doc before he won the Junior Researchers Competition Nanotechnology 2002 held by the German Federal Ministry of Education and Research. With the funding of this price he established his own research group at the Center for NanoTechnology (CeNTech) of the University of Münster, Germany. From 2006 to 2007 he was visiting assistant professor at the Department of Mechanical Engineering at Yale University. His work on the development of new AFM methods was honored with the Transfer-Prize 2007 of the University of Münster in 2008. He acted as the organizer of several international conferences focusing on atomic force microscopy techniques.